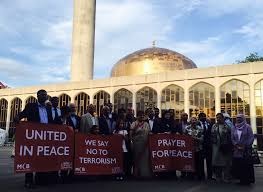 Ahead of the tenth anniversary of the 7 July bombings, British mosques hosted ‘Peace Iftars’ to remember and pray for all victims of terrorism and stand in solidarity in peace.
The events are being held around the country with mosques inviting local communities around them of all faiths and none to join in commemoration and break bread with Muslims as they break their fast in this holy month of Ramadan. To mark the events, the Muslim Council of Britain organised a national Iftar at the Islamic Cultural Centre in London. British Muslim leaders were joined by leaders from other faiths and civil society organisations.
In his speech to the event, Dr Shuja Shafi, Secretary General of the Muslim Council of Britain said: “The best way to defy the terrorist is to increase our bonds of unity, not to single out any one group of people for blame or opprobrium, especially if they had nothing to do with such carnage and have actively spoken out against it.
“Muslims find it hard to challenge the warped paths terrorists follow precisely because the terrorists recruit outside of mosques and from the fringes of the internet. Our challenge as a British Muslim community is to redouble our efforts and provide a stronger voice and platform for young people. One where they can express their anxieties and engage confidently without being labelled as extremist.
It also involves leadership in wider society too. Words matter here too. Singling out an entire community and demanding apologies from them helps no one. It increases alienation, and does not help work out the problems. For the last ten years we have had endless debates about how we tackle terrorism. Now, the government is proposing a raft of new strategies to try again.
At the MCB as well, we are initiating a grassroots conversation to explore alternative strategies. These debates continue in parallel, even though we have a common objective. So tonight, I am making a plea tonight that we draw a line, move beyond narrow ideological baggage, and work together to tackle terrorism.”