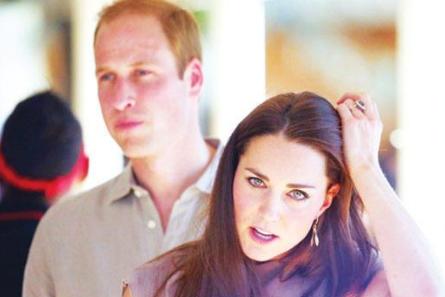 The British media maintained a blackout Wednesday on an offending photograph of Prince William’s wife Kate, despite the picture being used in other countries.
One of Rupert Murdoch’s Australian newspapers published the photograph on Wednesday, saying it was refusing to follow the “ridiculous” ban imposed by the British press. The Sydney Daily Telegraph published the photograph the day after Germany’s biggest-selling newspaper, Bild, became the first publication to use the image.
In Bild the photograph was accompanied by a caption declaring that the future queen had a “beautiful bum.” It shows the Duchess of Cambridge’s blue and white summer dress lifted by a gust of wind when the royal couple got out of a helicopter in the Blue Mountains, west of Sydney.
The British press initially reacted with outrage to Bild, with the Daily Mail calling it “a breach of privacy” while blasting the “crude” caption that appeared alongside.
On Wednesday, the Daily Mail took a different approach, publishing the picture with the offending area pixellated alongside a piece by Australian-born columnist Amanda Platell urging Kate to dress differently to avoid “another embarrassing wardrobe malfunction.”
The Times’ columnist Carol Midgley meanwhile described the decision by foreign newspapers to use the picture as “sleazy and creepy” and described the fascination as perplexing “as if people somehow expected to find something else under (her skirt).”
The image was widely available on the Internet and Twitter.
The official line from the royal family was a resounding no comment.
The publication of the photograph raises fresh questions about the royal family’s privacy.