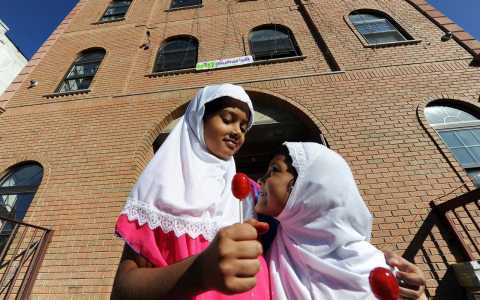 One of Britain’s top rated primary schools has banned girls aged under eight years old from wearing the hijab.
St. Stephen’s primary school, in the east London suburb of Newham has also forbidden Muslim pupils from fasting on school days during Ramadan, the Sunday Times reported.
Arif Qawi, chairman of the school’s governors urged the Department of Education to “step up” and take the issue out of its hands.
“We did not ban fasting altogether but we encouraged them to fast in holidays, at weekends and not on the school campus,” he told the newspaper. “Here we are responsible for their health and safety if they pass out on campus .. it is not fair to us.”
He claimed some students were fasting from as young as eight years old, despite some clerics advising they not start until they have reached puberty.
A spokesman for the Department of Education told newspaper: “It is a matter for individual schools to decide how to accommodate children observing Ramadan, and to set uniform policies.
“We issue clear guidance on uniform and to help schools understand their legal duties under the Equality Act.”