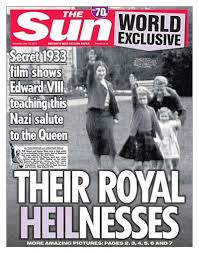 Buckingham Palace voiced disappointment Friday after a British newspaper published images allegedly showing a young Queen Elizabeth II giving a Nazi salute in the early 1930s.
The front page story in Saturday’s edition of The Sun shows the queen, then aged around six, briefly raising her right hand in the air as her mother, the late Queen Elizabeth the Queen Mother, does the same.
The headline on the story read: “Their Royal Heilnesses” — a reference to the “Heil Hitler” greeting used in Nazi Germany.
They were apparently being encouraged by the queen’s uncle, the future king Edward VIII, who went on to meet Adolf Hitler and abdicated in 1936 over his desire to marry US divorcee Wallis Simpson.
The images come from a 20-second black and white home movie which The Sun reported was shot at the royal family’s rural Balmoral estate in Scotland in 1933 or 1934 and has never been seen before.
A spokesman for Buckingham Palace said in a statement: “It is disappointing that film, shot eight decades ago and apparently from HM’s (her majesty’s) personal family archive, has been obtained and exploited in this manner.”