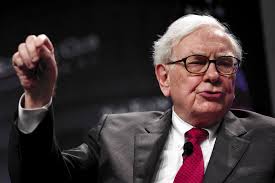 Billionaire Warren Buffett says owning stocks is the key to building wealth over time, but investors must avoid the common mistakes of trading too often and paying high investment fees.
The billionaire investor says there’s every reason to expect stocks to perform well long-term, even if prices are volatile.
Buffett says his Berkshire Hathaway Inc. conglomerate benefited over the past 50 years from the S&P 500’s growth from 84 to 2,059.
He says no commentator or investment adviser can predict the stock market.
He said “market forecasters will fill your ear but will never fill your wallet.”
Buffett isn’t immune from investing mistakes. He told Berkshire shareholders the company lost $444 million on its investment in British retailer Tesco largely because he was slow to sell the $2.3 billion stake.
Berkshire Hathaway Inc.’s fourth quarter profit slid 17 percent because of declines in the paper value of its investments and derivative contracts.
Buffett’s company released its latest results Saturday along with his letter to shareholders.
Berkshire’s quarterly net income declined to $4.16 billion, or $2,529 per Class A share, on $48.3 billion revenue. That’s down from $4.99 billion, or $3.035 per share, on $47 billion revenue last year.
The biggest factor was investment and derivative gains of $192 million this year compared to $1.2 billion last year.
Buffett says operating earnings, which exclude investments, are often a better measure. Those were $3.96 billion, or $2,412 per share, up from $3.78 billion, or $2,297 per share.
The four analysts surveyed by FactSet expected operating earnings per of $2,655.09 on average.