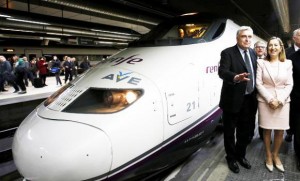 A high-speed rail service linking Spain and France has been inaugurated that will cut the journey time between Barcelona and Paris by half.
Up until now the train journey between these two cities lasted some 12 hours, but the new tracks will enable passengers to complete it in just over six.
Spain’s tourism statistics agency Frontur says travelers make 82 million trips between the two countries annually, mostly by car.
Spain’s train operator RENFE said Sunday it hopes to lure some air-travel passengers.
The service, which opened Sunday, will also provide bullet trains to cities like Madrid, Marseille, Toulouse and Lyon.