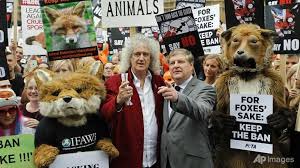 British Prime Minister David Cameron was forced into an embarrassing climbdown on Tuesday over fox-hunting, cancelling a parliamentary vote that would have relaxed the decade-old ban after it became clear he would lose.

Hundreds of protesters who had gathered outside parliament, including Queen guitarist Brian May, cheered the decision to scrap Wednesday’s vote but vowed to block any further efforts by the Conservative government to water down the ban.

Officials had portrayed the change to the contentious 2004 Hunting Act as a purely technical move to end discrepancies between Scottish and English law, but the prospect of a vote reopened bitter divisions over the issue.

The law bans the pursuit and killing of foxes with dogs, but farmers can still use hounds to “flush out” the animals to be shot as a means of pest control and wildlife management. Hunts can also use dogs to pursue a false trail.

Farmers in England and Wales are restricted to using two dogs in the flushing out, but the amendment would have allowed them to use packs of hounds as under Scottish law. At Tuesday’s protest, where demonstrators wearing fox masks, throwing smoke bombs and shouting “fight for the fox” briefly blocked traffic outside parliament, May said the amendment would have made prosecutions all but impossible.

“If it had gone through we would have seen packs of dogs roaming around the countryside – who can decide if they’re there to flush out a fox to be shot, or if they’re there for the old-fashioned hunting, ripping animals apart and disemboweling them while they’re still alive?” he said.

Barney White-Spunner, executive chairman of the pro-hunting lobby group the Countryside Alliance, said it was “deeply disappointing” that the government had backed down.

The changes would have represented “a significant improvement for many farmers and hunts”, he said, adding: “We look forward to the government bringing the amendments back to parliament in due course.”

The vote was cancelled after the Scottish National Party (SNP) party announced it would join forces with the opposition Labour party to block the change.

“The government has decided that tomorrow is not the time to proceed with the vote,” Cameron’s spokeswoman said, adding that further proposals would be outlined “in due course”.

The SNP previously said it would not vote on hunting in England because the law did not concern Scottish voters.