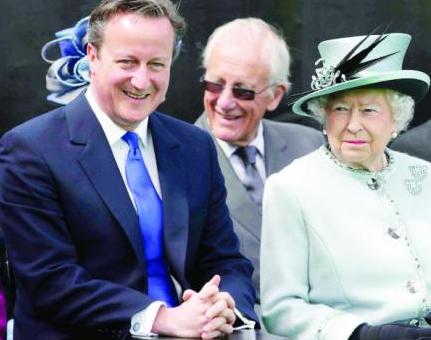 Prime Minister David Cameron on Monday called for an overhaul of British human rights laws as he marked the 800th anniversary of the signing of the Magna Carta at a ceremony led by Queen Elizabeth II.
The commemoration was held on the meadow in Runnymede, south England, where on June 15, 1215 the queen’s distant predecessor King John sealed the foundation document for Western parliamentary democracy.
Addressing the crowd, Cameron said the charter had “shaped the world for the best part of a millennium.”
“What happened here eight centuries ago is as relevant today as it was then,” he said.
“The seeds sown here have grown throughout the world. In America; in India with Gandhi and South Africa with Nelson Mandela.”
Cameron’s Conservative government is currently locked in a debate about Britain’s human rights legislation.
The party has promised to repeal the existing Human Rights Act, which incorporates the European Convention of Human Rights into British law, and replace it with a British Bill of Rights.
“Here in Britain, ironically — the place where those ideas were first set out — the good name of human rights has sometimes become distorted and devalued,” Cameron said.
In a Facebook post, he warned that criminals were abusing the current system “with spurious appeal after spurious appeal” and that Britain could not deport “dangerous foreign terror suspects.”
“Let’s put human rights right,” he said.
Campaigners have warned that repealing the Human Rights Act would be a step back for Britain.
Monday’s ceremony was the culmination of months of anniversary celebrations for the Magna Carta.
A replica of the Magna Carta, Latin for “Great Charter,” made its way down the river on board the Royal Barge Gloriana on Saturday, leading a flotilla of 200 boats.
The 3,500 word charter made the monarch subservient to the law and is widely recognized as the first charter protecting human rights and freedoms.
It was drafted by the archbishop of Canterbury, and approved by King John in an attempt to subdue rebellious barons angry at his financial incompetence and treatment of noblemen.
The document was annulled by the pope nine weeks later, ruling that the king had been forced to sign it under duress, but was later reissued after John’s death in 1216.
Symbolically, the leaders of Britain’s three traditional estates of power — the monarch, the prime minister and the archbishop of Canterbury — were seated next to each other during the ceremony.
As part of the celebrations, a major new art installation comprising bronze chairs was unveiled at the site, honoring the calf-skin document’s 39th clause, which gave the right to a jury trial.
Princess Anne rededicated the American Bar Association memorial, the first permanent tribute erected at the site in 1957, and a statue of the queen was revealed at the site on Sunday.
The four copies of the document that survive, two in the British Library and one each in Lincoln and Salisbury cathedrals, were brought together for the first time this year for an exhibition in London.