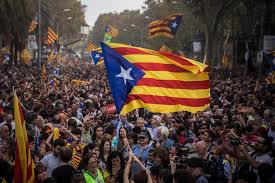 The Spanish government moved to impose direct rule over Catalonia on Friday, stripping the region of its autonomy less than an hour after its parliament declared independence in a stunning show of defiance to Madrid.
Although the Catalan declaration appears to be a doomed gesture, both sides’ moves take Spain’s worst political crisis in four decades to a new and possibly dangerous level.
Spanish Prime Minister Mariano Rajoy called for calm and said the rule of law would be restored in Catalonia, where secessionists have long cherished the dream of a separate nation.
A crowd of more than 2,000 independence supporters gathered in the Ciutadella Park outside the regional parliament in Barcelona, shouting “Liberty” in Catalan and singing traditional songs as the independence vote went through.
The motion passed in the parliament after a passionate debate from advocates and opponents of independence said Catalonia constituted an independent, sovereign and social democratic state.
Catalan leader Carles Puigdemont left the chamber to shouts of “President!” and mayors who had come from outlying areas brandished their ceremonial batons and sang the Catalan anthem “Els Segadors” (The Reapers).
“Catalonia is and will be a land of freedom. In times of difficulty and in times of celebration. Now more than ever,” Puigdemont said on Twitter.
But immediately after news of the vote, which three opposition parties boycotted, Spanish shares and bonds were sold off, reflecting business concern over the turmoil in the wealthy region.
Within an hour, the upper house of Spain’s parliament in Madrid authorized Rajoy’s government to rule Catalonia directly — an unprecedented move in Spain since the return of democracy in the late 1970s.
In Brussels, the president of the European Council, Donald Tusk, said the independence vote changed nothing and the EU would only deal with the central government.
The United States, Britain, France and Germany also swiftly dismissed the declaration and expressed support for Rajoy’s efforts to keep Spain united.