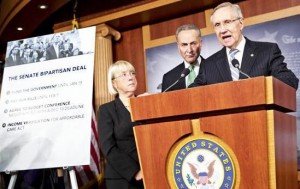 The US government reopened its doors Thursday after Congress passed legislation to end a government shutdown and — just in the nick of time — avert a US debt default in a bipartisan deal that left Republicans little to show for the epic political drama that threatened to rattle the world economy.
The Senate voted 81-18 to send the measure to the Republican-controlled House of Representatives, which passed it late Wednesday night 285-144. President Barack Obama signed the measure — which adhered strictly to the terms he laid down when the twin crises erupted more than three weeks ago — shortly after midnight Thursday.
Congress had faced a deadline of 11:59 p.m. on Thursday to raise the government’s borrowing authority or risk a default on its obligations.
The bill reopens the government through Jan. 15 and permits the Treasury to borrow normally through Feb. 7 or perhaps a month longer. It includes nothing for Republicans demanding to eradicate or scale back Obama’s signature health care overhaul.
“We fought the good fight. We just didn’t win,” conceded House Speaker John Boehner as lawmakers lined up to vote on the bill.