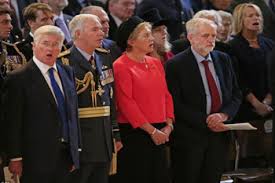 The new leader of Britain’s opposition Labor Party faced heavy criticism on Wednesday for remaining silent while the national anthem was sung at a religious service to commemorate the 75th anniversary of Nazi Germany’s air attacks on Britain.
The front pages of Britain’s mainly right-leaning press carried pictures of left-winger Jeremy Corbyn, an anti-war campaigner and anti-monarchist, standing silently as those around him sang “God Save The Queen” during the service at St Paul’s Cathedral.
Headlines included “Corbyn snubs Queen and Country” and “Not save the Queen.”
The decision by Corbyn, who was elected on Saturday with strong backing from his party’s members but has less support among Labor lawmakers, was criticized both by members of the armed forces and by some within his party.
“It will have offended and hurt people,” Kate Green, a Labor lawmaker and member of Corbyn’s policy team, told BBC Radio on Wednesday.
Asked if he should have sung the anthem, she said: “I think it would have been appropriate and right and respectful of people’s feelings to have done so.”
Labor said Corbyn’s attendance at the service on Tuesday to mark the battle between the Royal Air Force and the German Luftwaffe in 1940 had shown his respect for those who fought.
“The heroism of the Royal Air Force in the Battle of Britain is something to which we all owe an enormous debt of gratitude,” the party said in a statement. “He stood in respectful silence during the anthem.”
Starting out as a rank outsider who struggled to get on the Labour leadership contest ballot paper, Corbyn rode a wave of grassroots enthusiasm to emerge as the shock winner, but his rise has divided Labor.
Some, particularly in the party establishment, fear he will repel voters with radical policies that include unilateral nuclear disarmament, nationalisation and wealth taxes.
His first few days have been characterised as chaotic by the media, with the party appearing unclear about what its position is on key issues such as Britain’s membership of the European Union. Corbyn also came under fire for not appointing any women to the top few jobs in his team.
The Labor leader will face Prime Minister David Cameron for the first time in parliament on Wednesday during the head of government’s weekly question session. In a novel approach, he has asked members of the public to send in suggestions for what he should ask Cameron.