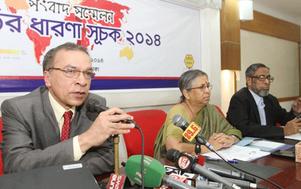 Bangladesh is the 14th most corrupt country in the world, said Corruption Perceptions Index 2014 of Transparency International on Wednesday.
Last year, the country was 16th in the table, which means the situation has worsened.
In the index, Somalia is the most corrupted country while Denmark is the lowest in corruption ranking.
The CPI ranked Sudan, North Korea and Somalia as the worst offenders and Denmark, New Zealand and Finland as the most squeaky clean.
It pointed to a rise in reports of corruption in Turkey, which suffered the year’s biggest fall in rank, and low rankings for the major emerging economies known collectively as the BRICs-Brazil, Russia, India and China.
The Berlin-based group’s table is the most widely used gauge of corruption by governments, police, court systems, political parties and bureaucracies, a scourge it says undermines development and deepens poverty.
But this year TI highlighted the role multinational banks and the world’s financial centres play in allowing the dodgy elites of some developing countries to stash away or launder their ill-gotten millions.
Almost every banking scandal that involves money-laundering has gone beyond just small island-state tax havens to really point to illicit funds, corrupt funds, landing in the likes of London, New York, Frankfurt, TI advocacy and research director Robin Hodess told AFP.
She highlighted large fines paid by the bank HSBC to settle claims that it had allowed itself to be used by money launderers in Mexico, and by BNP Paribas for having transferred funds on behalf of Sudan and other countries blacklisted by the US.
Corruption is a problem for all economies, requiring leading financial centres in the EU and US to act together with fast-growing economies to stop the corrupt from getting away with it, the group said.
It said the EU and US should, like Denmark, move to create public registers for all companies legally based in their countries, listing all beneficial ownership information.
Public registers that show who really owns a company would make it harder for the corrupt to take off with the spoils of their abuse of power, said TI managing director Cobus de Swardt.
‘Culture of impunity’
Transparency says that because corruption is illegal and secretive, it cannot be empirically measured. So instead it collates surveys from the World Bank, African Development Bank, Economist Intelligence Unit
and other bodies.
It then ranks 175 countries on a scale of 0-100, where zero means very corrupt and 100 signifies very clean. This year the average score was 43, and two thirds of countries were below 50.
Turkey slumped the most, dropping five points to a CPI score of 45. China was down four points to 36, the same decline as Rwanda, Malawi and Angola.
TI said that Turkey, rocked by anti-government protests last year, has since seen ‘a crackdown on free speech’ with journalists persecuted and arrested.
‘With a series of investigations into bribery and corruption charges against people considered close to the government, the general perception of corruption has increased substantially,’ it said.
In China, despite an anti-graft crackdown, ‘too many corruption cases take place behind closed doors and the manner in which people are prosecuted needs greater transparency’, the group said.
It pointed out that in January ‘leaked documents revealed 22,000 offshore clients from China and Hong Kong, including many of the country’s leaders’.
China must ‘outlaw all bribery, provide far greater access to information and create even more robust whistleblower protection’, it warned.
Problems in other big emerging economies include questions about a major oil company bribing Brazilian politicians, concerns about Indians using bank accounts in Mauritius and wealthy Russians stashing their funds in Cyprus, it added.
‘Fast-growing economies whose governments refuse to be transparent and tolerate corruption create a culture of impunity in which corruption thrives,’ said the group’s chairman Jose Ugaz.