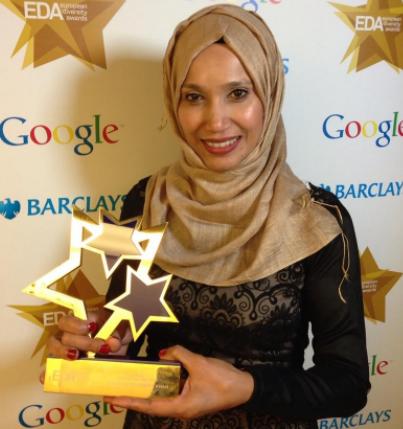 Tower Hamlets Councillor Rabina Khan, Cabinet Member for Housing and Development, was named ‘Hero of the Year’ at this year’s European Diversity Awards.
The award was given to Councillor Khan in recognition of her achievements in promoting equality and diversity in her working life – as a writer and film producer; in her political life – as a ward councillor and Cabinet Member, and in her personal life as a mother of three children and well-respected member of the local community.
Cllr Rabina Khan was chosen from a shortlist of eight including ITN’s Managing Editor Robin Elias and comedian and actress Francesca Martinez.
A statement from the European Diversity Awards said: “Rabina Khan is a truly inspirational Muslim woman who has dedicated her life, both personally and professionally to creating an inclusive and equitable society for all.
“Her particular focus has been on challenging perceptions of Muslim women and advancing the integration of Muslim women into mainstream society across Europe.
“She has achieved this through writing, producing and directing a number of ground-breaking films including The Good Wife and Shrouded.  She has also written a number of novels and short stories highlighting positive role models of Muslim women as well as working with the police and criminal justice system to create greater understanding of the complex issues at play for Muslim communities in Europe.” 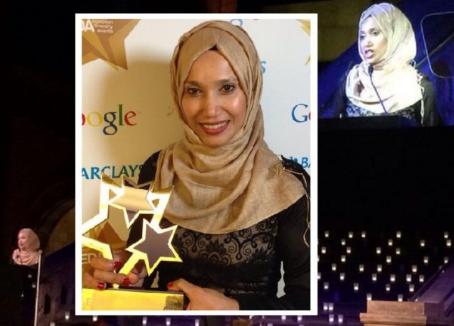 Speaking after the ceremony, Cllr Rabina Khan, said: “I am hugely honoured, humbled and grateful to be recognised at the European Diversity Awards. At a time when there are many who seek to sow division in our societies, the European Diversity Awards is a testament to how much more can be achieved when we stand together.
“If my work can encourage other women, particularly mums, living ordinary lives in Britain and across Europe, to get involved in politics and public life more generally, and act as positive role models to today’s generation of Muslim women, then that will be my greatest achievement.”
Tower Hamlets Mayor, Lutfur Rahman, said: “I am delighted that Councillor Khan has received recognition for making equalities a critical dimension of her work. I extend my congratulations and best wishes to her. ”
BBC newsreader Jane Hill, who hosted the ceremony, explained the ethos of the awards, saying: “The European Diversity Awards recognise excellence in the areas of gender, disability, sexual orientation, age, race, culture and religion across Europe. They are unique in recognising all aspects of diversity across the whole of Europe and celebrate the best across both the corporate and campaigning aspects of diversity.”
This year’s judges included Baroness Doreen Lawrence, herself a former winner of the award, a range of leaders and diversity professionals from banks and businesses and Labour MEP Michael Cashman. Other winners at the Diversity Awards included BBC Newsnight presenter Evan Davis.