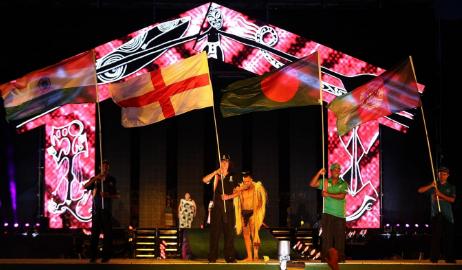 Opening Ceremony events in Christchurch and Melbourne kick-start event in blaze of colour, song and dance.
The 2015 ICC Cricket World Cup has opened on a whimsical note on a golden evening in Christchurch. An estimated crowd of 10,000 gathered at North Hagley Oval in the heart of the city to soak up an irreverent mix of music, dance and cricket two days out from the action getting under way. A similar crowd gathered at Melbourne’s Sidney Myer Music Bowl.
The first game of the tournament is between New Zealand and Sri Lanka at neighbouring Hagley Oval, closely followed by the Australia and England clash in front of an expected 90,000 at the MCG. The free ceremony on Thursday concluded with stage entertainment featuring some of New Zealand’s best-known music acts, celebrities and fireworks. Before that, there was a family-friendly feel to the event, which appeared to unfold with no problems catering for the large crowd.
Christchurch student Sam Toomey, 12, enjoyed playing in one of the games of “backyard cricket” in front of a Sri Lankan dancing troop. He was looking forward to the tournament and appreciated organisers designating Christchurch as host of both the opening ceremony and the first game.
It is one of the city’s first major events since the devastating earthquake that struck three years ago and resulted in Christchurch losing its hosting rights for the 2011 Rugby World Cup. “I remember the day they announced we weren’t getting the rugby, it seemed like the worst thing that could happen,” Toomey told NZ Newswire. “Getting some cricket here meant a lot to me and my friends.”