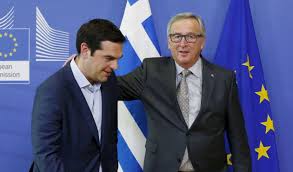 Athens announced that Greece will not repay its €1.6 billion debt to the IMF, on today’s deadline at 8PM.
European Commision, European Central Bank, the IMF have all given Greece some solutions of this debt crisis. Even if Greece does not pay its debt the IMF will announce it officially, however Greece will not be disclosed to fall into default.
Until the results of July 5 referendum, deposits kept in Greek banks will be assured by the ECB. If the July 5 referendum votes “no” the ECB will put an end to the guarantee for deposits in Greek banks. It will also end in the presence of emergency liquidity assistance to Greek banks. Moreover, on July 6 morning the IMF will announce that Greece has fallen into default. Following this statement, credit rating agencies are expected to reduce Greece’s credit rating sharply.
If the referendum says “yes” then the EU and the IMF will determine Greece’s way out of the crisis. Accordingly, in case of resignation of Tsipras’ government the European Central Bank and the IMF will continue to support Greece. It is stated that the credit rating agencies will review the notes for the Greece’s capabilities. If Tsirpas is forced to resign, it will considered as if the referendum voted “no”.
Greece’s 323 billion euro debt finds 60 percent to the euro zone, 15 percent in government bonds, 10 percent to the IMF, 8 percent to Greek banks, other creditors, especially foreign banks, while 6 percent to the European Central Bank.
Tsirpas and his cabinet urge people to vote “no”, and saying that after the referendum negotiations would start from a stronger position. Greek PM also said that he will resign if people vote “yes” on the upcoming referendum.