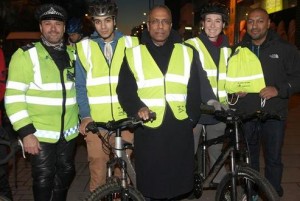 Tower Hamlets Council Officers joined forces with the Met Police to give away cycling safety packs during the latest Operation Safeway safety initiative in Mile End (Jan 9).
Stationed around a busy road junction on the Mile End Road, officers targeted commuter and resident cyclists offering advice on improving safety and handing out cycling safety packs.
Tower Hamlets Council has funded 1,000 high visibility safety packs for cyclists. These packs contain a high visibility jacket, reflective ruck sack cover, reflective tags, flashing armbands, reflective armband and a small holdall. Lights were also given away to those cyclists without them.
Mayor of Tower Hamlets, Lutfur Rahman, said: “Keeping cyclists safe on the roads is of huge importance and I’m delighted that we have been able to provide these safety packs to ensure high visibility when cycling. 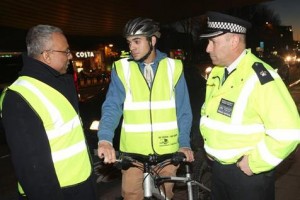 “It was encouraging to see the cyclists engaging with the police and council officers and I hope the additional safety advice will help cyclists to stay safe on our roads.”
Superintendent of Safer Transport, Rob Revill, said: “This is fantastic support from a local authority for the Operation Safeway initiative and I’m really pleased Tower Hamlets is supporting our aims of helping to keep road users safe and reducing death and accidents on the road.”
Enrique, one of the cyclists receiving the pack, said: “I know many cyclists, especially those just starting out, don’t have good safety equipment. The pack is great and the advice received from the officers is very important for keeping safe on the roads.”
This is the latest initiative from Tower Hamlets Council in tackling safety for cyclists. The council already offers a number of other initiatives to promote safe cycling in the borough such as free cycling training sessions for anyone that lives, works or studies in Tower Hamlets. The council also works with the Metropolitan Police to run the Exchanging Places events, which give cyclists the opportunity to sit in an HGV cab and get a driver’s perspective on how difficult it can be to see cyclists on roads.
To find out more about cycle training and future exchanging places events visit www.towerhamlets.gov.uk/cycling 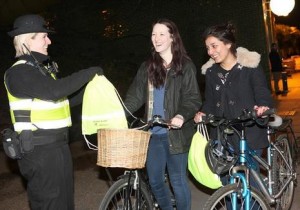