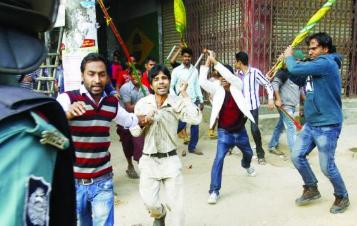 Deadly clashes erupted on the streets of Bangladesh Monday on the first anniversary of Prime Minister Sheikh Hasina’s controversial re-election as police besieged the main opposition leader in her office.
Police said two supporters of the opposition Bangladesh Nationalist Party were killed in clashes with ruling party activists in the northern town of Natore, fueling tensions on a day which the BNP has declared to be “Democracy Killing Day.”
Officers padlocked all the gates of the Dhaka office of BNP leader Khaleda Zia, confining her inside, after she urged activists to take to the streets as part of a campaign to force Hasina to hold new polls.
A local police inspector said the two BNP activists were shot dead during clashes with supporters of Hasina’s Awami League. At least 15 people were injured, Mohammad Fariduddin added.
Violence also broke out in the capital and in around half a dozen towns as police and Awami League followers clashed with hundreds of BNP protesters, local television channels said.
Hundreds of pro-opposition lawyers joined the protests at the sprawling complex which houses the supreme court, where they waved black flags to signal the death of democracy. Police locked the gates into the main building, confining the protesters to the grounds outside.
Zia issued the call for mass protests from inside her office, where she has been confined since Saturday night after police cordoned off the area.
Authorities stepped up their siege Monday by parking 11 trucks outside her office in a blockade designed to thwart any attempt by her to head protests in person.