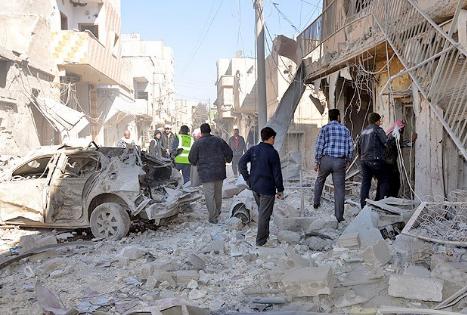 In five years of civil war, 400,000 Syrians have been killed and another 70,000 have perished due to a lack of basics such as clean water and healthcare, the Guardian newspaper reported on Thursday.
With those injured in the conflict, that amounts to more 11 percent of the population, it said, citing the Syrian Centre for Policy Research.
A U.S.-led coalition is trying to destroy Islamic State of Iraq and Syria (ISIS)  militants in Syria and wants President Bashar al-Assad to go. But Russia and Iran are propping up Assad and oppose the opponents of Assad who are being supported by the West its Arab allies such as Saudi Arabia.
About 400,000 of the deaths were directly due to violence, while 70,000 died because they didn’t have proper healthcare, medicine, clean water or housing.
It said 1.9 million people had been wounded. Life expectancy has dropped from 70 in 2010 to 55.4 in 2015. Overall economic losses are estimated at $255 billion, the Guardian said.