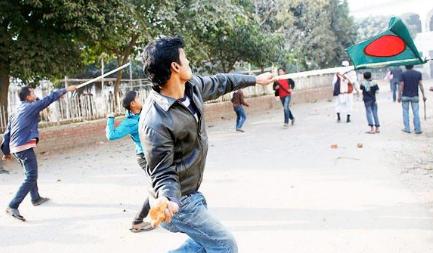 An 18-year-old man died after unidentified attackers hurled fire bombs at the vehicle in which he was travelling early on Sunday in Southern Barisal, lifting to 27 the death toll from violence in Bangladesh’s deepening political crisis since last year’s disputed elections.
Bangladesh’s government ruled out military deployment to establish order after the latest violence surrounding a standoff between Prime Minister Sheikh Hasina and Begum Khaleda Zia, leader of the opposition Bangladesh Nationalist Party.
The violence has worsened steadily since Jan. 5, when protests erupted over last year’s election, which was boycotted by the BNP.
The renewed tension between the political rivals raises the spectre of a long, destabilising spell of unrest for Bangladesh and its economy.
“There is no such situation in the country requiring the deployment of the army-led joint forces,” Asaduzzaman Khan, the junior minister for home affairs, told reporters on Sunday.
The truck passenger killed on Sunday was named by police as 18-year-old Mohammad Sohag. The driver of the vehicle jumped clear and escaped with minor burn injuries.
At least 30 people, including five police officers, have been injured in attacks on vehicles in Dhaka since Saturday night.
“The culprits won’t be spared,” Prime Minister Hasina said on Sunday while visiting a hospital to see policemen who had sustained severe burns.
Authorities have blocked popular internet calling and messaging service Viber on security concerns, Jakir Hossain, spokesman for the Bangladesh telecoms authority said.