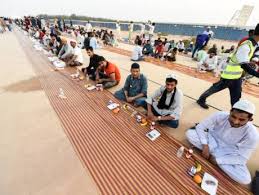 Dubai Police have broken a Guinness World Record for organising the ‘longest iftar table’ in the world stretching 6km.
More than 12,830 workers benefited from the longest iftar table, which was held in Dubai Industrial Park in Jebel Ali.
The ‘longest iftar table’ initiative took 200 hours of preparation and provided 18,500 iftar meals with the participation of more than 35 restaurants and 500 volunteers from various government departments in Dubai.
The extra meals were distributed to nearby labour accommodation and the Emirates Red Crescent’s Preservation of Grace project to provide suhour meals for workers.
The initiative was held under the patronage of Major-General Abdullah Khalifa Al Merri, Commander-in-Chief of Dubai Police, and in the presence of diplomats of India, Sri Lanka, China, the Philippines and Pakistan, senior police officers and sponsors.