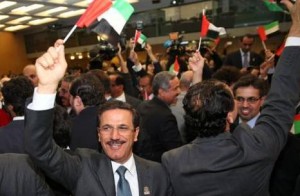 In a strong showing that was only to be expected, the UAE beat the competition in the crucial voting rounds to grab the rights to host Expo 2020.
The World Expos, held every five years, is a trade exhibition that attracts millions of visitors to the host country. The UAE made it clear early in its campaign that it was determined to host the event.
Dubai set the tone for their win in the very first round of voting, leading all other aspirants, including heavyweights Russia and Turkey.
The UAE’s performance improved with each vote. They improved their first round showing of 77 votes by gaining 10 more votes in the second round, while heavyweights Russia improved by only two. This gave credence to the fact that any political manoeuvrings that had been expected by countries had been negated by the sheer confidence of the UAE’s performance.
President His Highness Shaikh Khalifa Bin Zayed Al Nahyan called His Highness Shaikh Mohammad Bin Rashid Al Maktoum, Vice President and Prime Minister of UAE and Ruler of Dubai, to congratulate him on the win.
The win was expected given the kind of flawless campaign that the UAE had orchestrated across the world through the past two years. They did it with dignity and panache. Every facet of their preparation maintained a high standards right from the events that were organised to their status as a generous hosts and the impeccable showing of diplomacy by its high calibre ministers and government officials.
In the midst of the victory celebrations the words of Shaikh Abdullah Bin Zayed Al Nahyan, Minister of Foreign Affairs and Shaikh Ahmad Bin Saeed Al Maktoum, President of Dubai Civil Aviation and chairman and CEO of the Emirates Group, rang true.
“At the end of the day it all boils down to political play and ties,” said Shaikh Abdullah to Gulf News earlier. “I think these issues vary from one representative to another and from one country to another. It depends on the concern of the day. Sometimes it depends on who is caught up in traffic and doesn’t make it to the polling booth in time to cast the vote. There are so many variables that still need to be accounted for after the campaigning is over.”
Shaikh Abdullah drove home the point that Dubai’s win was only in keeping with the fitness of things and the UAE and Dubai performed as per the standards expected of them.
“As always we are confident about what we do in the UAE,” stated the bid committee Chairman Shaikh Ahmad in his usual modest manner. “We have always walked on the path to excellence and delivered on our many commitments. The UAE is a country which naturally attracts people across many platforms,” he said.
Crucial ballot
The crucial ballot to determine the winning bid took place at the Organisation for Economic Cooperation and Development centre (OECD) after a series of 20-minute presentations by the bidding candidates.
The UAE set the pace with Reem Al Hashemi, Minister of State and Managing Director of the Bid Committe, make the inaugural address. Her speech and the video presentation that followed was brimming with sincerity and simplicity and two qualities have always been the UAE’s hallmark.
“Today I stand before you delivering the most important speech of my life. We would be honoured and privileged to host Expo 2020 in Dubai. We began this journey with a view that we were willing to understand what the future would be and we explored ideas and thoughts. Then we defined the road map for Dubai Expo 2020. I hope in this journey you have understood us better: that we remain determined to deliver an inclusive expo. His Highness Shaikh Mohammad Bin Rashid Al Maktoum attended this assembly in the initial stages and he instructed us to deliver the strongest possible bid. Today, we are joined by 10 Federal Ministers and under the guidance of Shaikh Ahmad Bin Saeed al Maktoum we deliver to you the strongest file we can. The Expo team we formed in 2011 is still with you today.”
The bid for Expo 2020 is in line with Dubai’s ambitions for the future. It sends out a strong message to the rest of the world with this unprecedented win, the first for a Middle Eastern country. They are willing to ‘connect minds and create the future’ according to the tenets of their bid. and nowhere could that be more possible than in the UAE.
“All our future plans fall into place with Expo 2020,” said Shaikh Ahmad. “The Expo is not just for the UAE and its neighbouring regions, it is also for at least two billion people who live in this extensive region. It is for everybody.”
An estimated total funding of €6.5 billion have been earmarked for this event with €5.2 billion s anticipated as capital investment for the Expo’s infrastructure environment.
Dubai’s economy is set to receive an added value boost of roughly €17.7 billion. More exciting, however, will be the innumerable opportunities that will be created boosting the growth of tourism and logistics in the UAE and ME.
An estimated 25 million visitors are set to arrive in the country as a result of a successful bid, thus influencing tourism, trade, infrastructure and investment. Sultan Bin Saeed Al Mansouri, Minister of Economy, however, feels that this number is conservative and by the time people transfer the merits of Dubai by word of mouth the total could swell to 100 million. A total of 270,000 jobs will also be conceived to cater to an expanded economy. -gulfnews