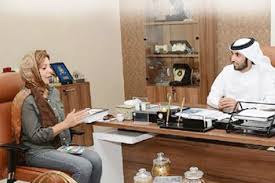 Inspired and touched by Abu Dhabi tourism police’s values of tolerance and civilised approach, a Dutch female tourist has converted to Islam.

The Tourism Section in Investigation Directorate, after liaising with the competent entities, hosted Christina Dafano, who deeply expressed her happiness to embrace Islam, according to a statement issued by Abu Dhabi Police on Saturday.

After reciting the Shahada, Dafano changed her name Noura.

The statement added that the tourist had enquired about Sheikh Zayed Grand Mosque, as she wanted to visit it. The police not only guided her but also contacted the police office at the mosque to organise her visit and teach her about tolerance and peaceful coexistence (in Islam).

Colonel Ahmad Almazrouei, deputy director of the directorate, emphasised the police force’s keenness to adopt a tolerance as a professional standard for policing to promote security and safety in Abu Dhabi.

Dafano expressed her happiness in embracing Islam – stressing the tourism police staff’s attitude as a ‘pivotal push’ for her conversion.

The police gifted her the book “Zayed” in English, which chronicles the journey of the late founding father, Sheikh Zayed bin Sultan Al Nahyan, who made the UAE a symbol of tolerance paving the way for a modern, stable and secure country.