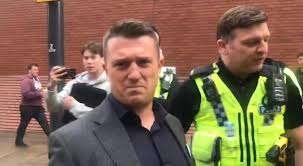 The English Defence League founder Tommy Robinson has been jailed for 13 months after breaking contempt of court laws.
His imprisonment can be reported for the first time after the right-wing activist was arrested on Friday outside Leeds Crown Court.
Mr Robinson, 35, was seen in footage being led towards the back of a police van and searched in footage posted on his Facebook page.
Robinson founded the English Defence League in Luton in 2009 before resigning in 2013.
The organisation was responsible for violent marches on the streets where members clashed with police and counter-demonstrators.