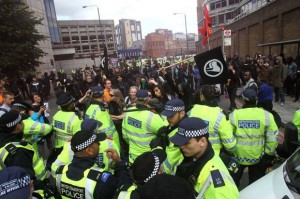 Excellent partnership work between the Mayor of Tower Hamlets, the council, the local community, faith groups and the Metropolitan Police meant that the English Defence League’s (EDL) march today (September, 7) passed off without major incident.
The EDL reached Aldgate High Street, as planned, where a static demonstration took place. They were then escorted by the police back over Tower Bridge.
There were no incidents of reported damage to property, businesses or landmarks in Tower Hamlets as the march was contained by the police at all times.
Tower Hamlets Mayor, Lutfur Rahman, who was part of the United East End and United Against Fascism counter-demonstration in the borough, said: “I am pleased that our plans to prevent the EDL from spreading disruption and racism in our borough were successful.
“In fact today was a chance for our diverse communities to come together and strongly reject the messages of hate that the EDL represent.
“The council, its partners and the local community have remained united in the face of a divisive and disruptive group and our message that our borough is ‘no place for hate’ has never been stronger.
“We will continue to oppose anyone who would wish to incite hatred against others because of their religious belief, ethnic origin or sexual orientation in Tower Hamlets, and we will continue to do all we can to ensure that our communities remain safe, cohesive and united.”
The council’s Rapid Response Team and Tower Hamlets Enforcement Officers were on hand throughout the day to provide support to the Police.