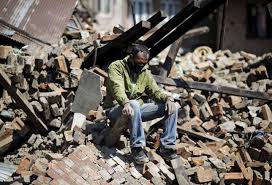 Eight million people have been affected by the massive earthquake in Nepal, and 1.4 million are in need of food aid, the United Nations says.
International aid has started arriving but there is still a shortage of medical equipment, food and body bags.
The 7.8 magnitude quake hit Nepal on Saturday destroying buildings in Kathmandu and severely affecting rural areas across the region.
A government official said on Tuesday the death toll has now risen to 4,790.
Almost 9,000 people have been injured, home ministry spokesperson Laxmi Prasad Dhakal said.
Water, food and electricity are in short supply and there are fears of outbreaks of disease.
“According to initial estimations and based on the latest earthquake intensity mapping, eight million people in 39 districts have been affected, of which over two million people live in the 11 severely affected districts,” said the most recent report from the UN Office of the Resident Co-ordinator.
The country’s most deadly earthquake in 81 years triggered avalanches that have killed 18 people on Mount Everest – the worst disaster in history on the world’s highest peak.
More than 200 people were trapped on the mountain but helicopters are bringing them to safety with about 60 rescued on Monday, according to the tourism ministry.
Almost the entire Nepali army and police have joined the search and rescue operations, officials say.
People are still being pulled from the rubble more than 50 hours after the tragedy.
Hospitals are unable to cope with the huge numbers of people in need of medical attention and some Nepalis have complained of aid being slow to reach them.
The Nepal government has acknowledged that it needs help from overseas asking for everything from blankets and helicopters to doctors and drivers.
Many countries have sent aid including India, China the UK and US.