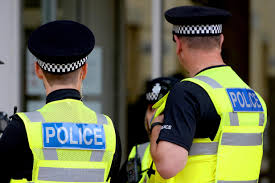 A woman who was around eight months pregnant was stabbed to death in London on Saturday, and her baby was in a critical condition, British police said.
Police were called to an address in south London at 3:30 a.m., where they found the wounded 26-year-old. Her baby was delivered and taken to hospital.
A 37-year-old man was arrested on suspicion of murder.
Prime Minister Theresa May has been fighting accusations that a funding squeeze on police as well as cuts in social services have contributed to a soaring incidence of knife-crime.
According to official statistics, there were 285 fatal stabbings in England and Wales in 2018, the highest level since records began more than 70 years ago.
“This is a horrific incident in which a young mother has lost her life and her child is critically ill,” Detective Chief Inspector Mick Norman said on Saturday.