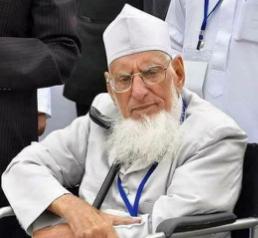 Noted theologian and Islamic scholar Maulana Mohammad Salim Qasmi, who was Chief Rector of Darul Uloom Waqf ever since its foundation, died Saturday afternoon in Deoband. He was 92.
Maulana Qasmi was ailing from last few months and was under medical observation in a local hospital. A couple of days ago he was shifted to his home in Deoband where he was kept on life support system. His funeral was held in Deoband after Eisha prayers.
Born on January 08, 1926, Maulana Qasmi was the son of Qari Mohammad Tayyab and grandson of Maulana Hafiz Muhammad Ahmad, Mohtamim (head) of Darul Uloom Deoband, and great grandson of Maulana Muhammad Qasim Nanatawi, the founder of Darul Uloom Deoband.
Maulana Qasmi was the Chief Rector of Darul Uloom Waqf Deoband, Vice President of All India Muslim Personal Law Board, president of advisory board of Mazahirul Uloom Saharanpur, President of All India Muslim Majlis-e-Mushawarat and was a permanent member of Fiqh Council of Al-Azhar, Cairo (Egypt).
Maulana Qasmi became Rector of Darul Uloom Waqf in 1982 when Darul Uloom Deoband split into two.
A renowned speaker and known all across due to his oratory skills, Maulana Salim also authored a number of books including Mabaadi al Tarbiyat al Islami (Arabic), JaizaTarjama Quran Karim, Taajdar e Arze Haram kaPaigham, Mardaan e Ghaazi, Ek Azeem Tarikhi Khidmat and Safar Nama Burma.
Maulana Mohammad Salim Qasmi has left behind him a great legacy including his children who are doing remarkable service in various fields. Besides his son Mohammad Badr Alam Qasmi, who is running a charitable trust and a number of medical facilities, his daughter Uzma Nahid has formed a network of more than 3000 women. Using this network, Uzma Nahid has been working since last 30 years for the empowerment of women, especially to develop entrepreneurship skills among them.
Maulana Qasmi was one of the most distinguished theologians, one of the most respected religious leaders and guides of the current Islamic world.
He was awarded with Imam Mohammad Qasim Nanotvi International Islamic Award on 20 January 2014 in a conference in Johannesburg, South Africa, the second scholar to receive this award, the first recipient being Sheikh Mahmood Afindi of Turkey.
Maulana Qasmi is widely regarded as the only surviving religious scholar in the Deobandi tradition who links the present with the glorious past of the founders of the greatest Sunni institution of education in the subcontinent.
Meanwhile, president Jamiat Ulama-i-Hind, Moulana Syed Arshad Madni expressed deep sorrow over death of Maulana Qasmi.
Moulana Madni extended his condolences to the bereaved family, sympathizers and relatives. He appealed to Jamiat members and Madrassa students and teachers to pray for eternal peace of the deceased.