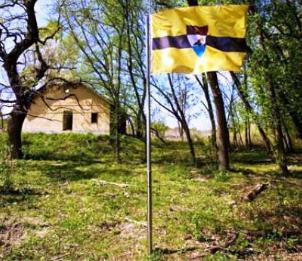 Welcome to the Kingdom of Enclava, the world’s newest ‘country’. Measuring at just 93 square metres, it is also the smallest. But the land, which is the size of a back garden, is unlikely to be given international recognition any time soon.
Nestled on the border between Slovenia and Croatia, its founders claim it has the right to exist because it has been established on land claimed by neither countries, the Sydney Morning Herald reported.
Piotr Wawrzynkiewicz, one of the founders, said the idea is to “create a place, where everyone, regardless of skin colour, religion or nationality, will be able to express their opinions, study for free, and earn money without worrying about taxes”.
The land, which has no citizens as yet, is located near the Slovenian town of Metlika and about 50 kilometres west of Croatia’s capital, Zagreb.
It is the second such micro-nation to be formed in a month and has been declared by a group of Poles who discovered that the land was “terra nullius” – no-man’s-land.
Micro-nations have been proclaimed in different parts of the world for decades but they’ve increased in recent years after founders use the internet to recruit thousands of virtual citizens.
Despite being the size of a suburban garden, its founders claim to have plans to create a tax-free community of like-minded people, who will be able to choose from five official languages – English, Polish, Slovenian, Croatian and Mandarin.
A constitution is being drawn up and so far more than 5,000 people have applied for honorary citizenship.