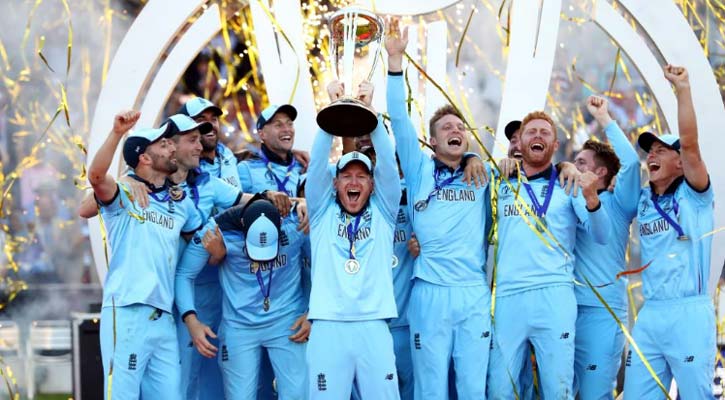 England won the World Cup for the first time ever on Sunday, holding their nerve to seal a thrilling Super Over victory against New Zealand after the final ended in a tie.
Eoin Morgan’s side finished on 241 all out in pursuit of New Zealand’s 241-8, sending the match at Lord’s to a six-ball shootout for each side.
England’s Ben Stokes and Jos Buttler took 15 off Trent Boult’s over before Jofra Archer stepped up to bowl against Martin Guptill and Jimmy Neesham.
With two runs required off the final ball, wicketkeeper Jos Buttler and Jason Roy combined to run out Guptill as he came back for the second.
That meant the host nation won on superior boundary count, sparking wild scenes of celebration at the “home of cricket.”
England, who have often cited a humiliating defeat by New Zealand at the 2015 World Cup as the catalyst for their climb to the top of the one-day international rankings, finally have a World Cup win to go with their three losing appearances in the 1979, 1987 and 1992 finals.
“Absolutely unbelievable, I still can’t quite believe it,” said Morgan. “A packed house at Lord’s — the support has been incredible from the very beginning of the tournament and we’ve managed to pull it off. It’s such a good feeling.”
“This has been a four-year journey, we have developed a lot,” he added. “We find it hard to play on wickets like that and today was about getting over the line. Sport is tough at times.”
The win comes four years after an embarrassing first-round exit at the 2015 World Cup and England were forced to dig deep during this tournament after three defeats in the group stages left them on the brink of elimination.
By contrast, defeat is devastating for New Zealand, who were also looking to win the trophy for the first time after being well beaten by Australia in the 2015 showpiece.

Ben Stokes, with 84 not out, had so nearly seen England to victory in regulation play but that ended with the scores level.
England were in deep trouble at 86-4 but Stokes and Buttler (59) shared a fifth-wicket partnership of 110.
Just when it seemed they would see England home, Buttler sliced fast bowler Lockie Ferguson to substitute fielder Tim Southee at deep point.
Ferguson then made it two wickets in three balls when Chris Woakes skied a catch to wicketkeeper Tom Latham, with England now 203-6 in the 47th over.
Needing 15 off the last over to win, Stokes was unable to score off the first two balls but lofted the third for six over long-on.
Then, with Stokes desperately completing a second run, his bat was struck by Guptill’s throw from the deep and the ball ricocheted for four more.
England got the target down to two from one ball but they could only manage a single, with last man Mark Wood run out, before the drama of the Super Over.
A man-of-the-match performance was redemption for Stokes after a 2017 street brawl threatened to ruin his career and he wept openly during the jubilant on-field celebrations.
“I’m pretty lost for words. All that hard work for four years and now to be stood here as champions of the world, it’s an amazing feeling,” Stokes said.
Earlier, fast bowler Liam Plunkett dismissed New Zealand captain and star batsman Kane Williamson for just 30 before removing established opener Henry Nicholls for an innings-best 55 in a return of 3-42 from his 10 overs.
Tom Latham hit 47 to help New Zealand to a total that agonizingly almost proved enough on a challenging wicket for batting.
“We have showed heart and fight to get to this stage and a tie in the final — it wasn’t meant to be,” said Williamson.
“The guys are shattered. It’s devastating. Tough to swallow.”