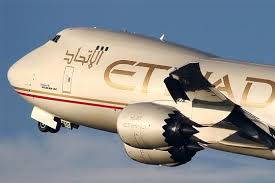 Etihad Airways celebrated the departure of its inaugural Airbus A380 flight at Abu Dhabi International Airport with a ribbon-cutting ceremony at the departure gate.
The event, which took place before Flight EY11 took off for London Heathrow at 2.35am, was attended on behalf of Etihad Airways by Richard Hill, chief operations officer, Chris Youlten, senior vice president network operations, Jeff Wilkinson, senior vice president technical, Calum Laming, vice president guest experience, and Aubrey Tiedt, vice president guest services.
Special gift packs were handed to guests on the inaugural flight, containing luggage tags, passport holders, commemorative A380 certificates and complimentary Wi-Fi vouchers.
In addition to being Etihad Airways’ first A380 service, the flight marked the debut of the airline’s new First Apartments, Business Studios and Economy Smart Seats, together with The Residence by Etihad – a three room suite with living room, bathroom and bedroom.
Located in the forward upper section of the A380 The Residence by Etihad offers guests a personal Butler who, for the inaugural flight, was British national, Georgina Henderson.
Georgina and other Etihad Airways Butlers have all received specialist training at the Savoy Butler Academy in London.
The A380 also features First Apartments, which are fully private suites with a separate reclining lounge seat and full-length bed, as well as a chilled mini-bar, personal vanity unit and wardrobe.
A total of 70 Business Studios are located on the upper deck of the A380 all offering aisle access and a fully flat bed of up to 80.5 inches long. The upper deck of the A380 is allocated to the premium cabins.
The Economy Smart Seat also debuted on the A380 and has enhanced comfort with the unique ‘fixed wing’ headrest on each seat.
The double decker aircraft will operate on EY11, one of the three daily London Heathrow services, departing at 2.35 am and arriving at London at 6.35am. By August 2015, every Etihad Airways flight between Abu Dhabi and London will be an A380 service.
James Hogan, President and Chief Executive Officer of Etihad Airways, said he is delighted with the new addition to their London service.
“The response from air travellers to our new A380, particularly The Residence by Etihad penthouse suite, has been incredible and we’re delighted to introduce the aircraft into commercial service.
“This last week has seen the successful final testing and preparations for the inaugural historic flight to London Heathrow and we look forward to welcoming guests onto the A380 aircraft at Abu Dhabi Airport.”