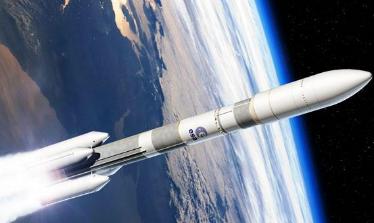 European nations approved funding for a new Ariane 6 space rocket, pooling their resources in a single, simplified version to tackle growing international competition. The new, lower-cost rocket will replace the current Ariane 5 from its first launch in 2020, French Research Minister Genevieve Fioraso said after ministerial talks in Luxembourg.
Science ministers from the 20-nation European Space Agency, which last month made headlines by landing a probe on a speeding comet, also approved European funding for the International Space Station (ISS) and a further mission to Mars.
Ariane 6 will account for about half of the eight billion euro ($9.9 billion) budget approved by ministers over 10 years.
“This decision will safeguard 16,000 direct jobs in France and 35,000 in Europe,” Fioraso said.
The agreement resolves a two-year strategy dispute between France, which backed the new rocket, and Germany, which had favored an interim upgrade to the current technology.
At a previous meeting two years ago, the nations settled for a compromise that would have seen both projects go ahead at greater cost. Ariane 6 will incorporate part of the studies for the abandoned upgrade, which was seen as key for German jobs.
Roberto Battiston, president of the Italian Space Agency, told reporters earlier that Europe had no choice but to bury differences to stay in the $6.5 billion space launch industry.
“At the end of the day, it must turn out to be something which can be competitive on the world market of satellites,” he said on the sidelines of the one-day meeting in Luxembourg.