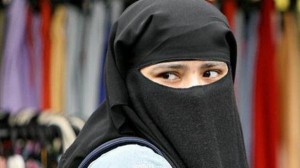 Students at a college in Birmingham, UK, have been banned from wearing face-covering veils, after the head-teacher ruled pupil’s faces must be visible at all times for security reasons, reported the Huffington Post UK on Wednesday.
Birmingham Metropolitan College has told its Muslim students they are not allowed to wear niqabs, a veil which covers everything but the eyes, so they are “easily identifiable at all times.”
Students at the school, which is home to around 9,000 teenage students, have branded the ban as “disgusting,” reported the Birmingham Mail.
One 17-year-old said: “It is a personal choice and I find it absolutely shocking that this has been brought in at a college in Birmingham city centre when the city is so multicultural and so many of the students are Muslim.
“It upsets me that we are being discriminated against.
“I don’t think my niqab prevents me from studying or communicating with anyone – I’ve never had any problems in the city before.”
Khalid Mahmood, an MP in Birmingham, told The Huffington Post UK he found the ban “difficult to believe.”
“I am seriously concerned that the college has taken this approach,” he said. “If there is an issue of security in identifying students for exams then there are other procedures for this. We do not have a legal ban like France so I don’t know why the college would want to do this.
“I see no reason why young women should not be able to practice their faith and wear what is appropriate for their religion,” Mahmood added. “It is about freedom to protect your rights.
“The college should demonstrate and encourage respect of belief, colour and background. [The decision] is not an example to set to students.”
The college’s principal and chief executive, Dame Christine Braddock, said the policy was authorized to safeguard students.
“We have a very robust Equality, Diversity & Inclusion Policy at Birmingham Metropolitan College but we are committed to ensuring that students are provided with a safe and welcoming learning environment whilst studying with us.
“To ensure that safeguarding is a priority, we have developed our policy alongside student views to ensure we keep them safe.
“This needs individuals to be easily identifiable at all times when they are on college premises and this includes the removal of hoodies, hats, caps and veils so that faces are visible.
“All prospective and progressing students, as well as staff, have been advised of the policy, which will mean everyone allowed on the premises can understand and know each other in a safe environment.”