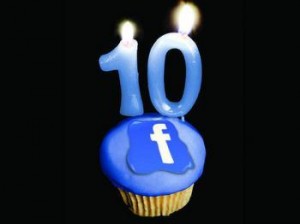 There are ten candles on the Facebook birthday cake. A phenomenal decade. Ten years ago it did not exist now, it has 1.23 billion users; to put that in perspective it’s something like the population of India.
It was the vision of Mark Zuckerberg. The anniversary comes on the back of soaring profits – $1.5 billion (1.1 billion euros) for 2013.
Despite a shaky 2012 initial public offering of shares, they are now trading at $60 dollars (44 euros). That puts the estimated net worth of 29-year-old Zuckerberg around $30 billion (22 billion euros).
The company has had to address legal issues: last year Facebook paid $20 million (14.8 million euros) in a class action lawsuit relating to users’ images being used in advertising content.
Researchers at Princeton University predict a bumpy ride for the social network site in the next decade, saying its user base will desert it as it falls out of fashion.
Using the same research methods as the university Facebook responded saying Princeton may be in danger of disappearing entirely.