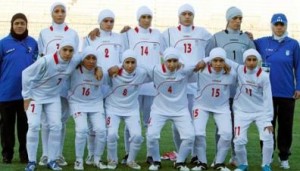 Muslim women footballers will not be able to sport the headscarf during games, after FIFA decided to lift a ban on head covers for religious reasons, following a meeting of the International Football Association Board (IFAB) in Zurich.
The decision comes after a two-year trial of head covers in the game passed without problems.
The Asian Football Confederation played a key role in convincing FIFA to put head covers on trial, after FIFA previously cited safety concerns.
“It was decided that female players can cover their heads to play,” said Fifa secretary general Jerome Valcke.
The issue was first raised when Iran’s national women’s team pulled out of a match with Jordan in 2011 when FIFA banned them from wearing headscarves.
As well as Muslim women, Sikh men, who are also required to cover their hair, will also benefit from the new rule change.
The amendment in the rules will become active as of June.