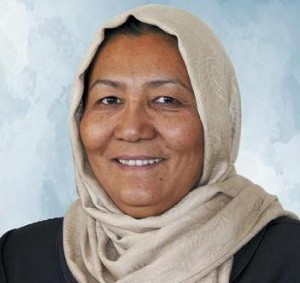 Afghanistan’s first and only female governor and a humanitarian worker from Myanmar’s Kachin minority are among this year’s recipients of the Ramon Magsaysay Awards, often regarded as Asia’s version of the Nobel Prize.
The Manila-based Ramon Magsaysay Awards Foundation announced Wednesday that it had selected three individuals and two organizations as this year’s awardees, including a Filipino doctor, an independent commission eradicating corruption in Indonesia and a civil society organization in Nepal created and run by human trafficking victims.
The awards, named after a popular Philippine president who died in a 1957 plane crash, honor people and groups who change their societies for the better.
Habiba Sarabi, 57, was chosen for helping build a functioning local government and pushing for education and women’s rights in Afghanistan’s Bamyan province despite working in a violent and impoverished environment in which discrimination is pervasive, the foundation said. Public education and the ratio of female students have increased in her province, where more women are taking up careers that were forbidden under the 1996-2001 Taleban regime.
“In the face of widespread hostilities toward women assuming public roles, her courage and determination are outstanding,” the foundation said of Sarabi, a member of an ethnic and religious minority in Afghanistan.
Lahpai Seng Raw, a 64-year-old widow, was selected for helping rehabilitate damaged communities in Myanmar amid ethnic and armed conflicts. The emergency relief, health care and sanitation projects of the civil society group that she helped found in 1997 in then-military-ruled Myanmar has today reached over 600,000 people across the country.
Another awardee, Ernesto Domingo, a 76-year-old physician, has dedicated his career to pushing for the poor’s access to health services and for groundbreaking and successful advocacy of neonatal hepatitis vaccination that has saved millions of lives in the Philippines, the foundation said.
Also being honored is Nepal’s Shakti Samuha, or Power Group, the world’s first NGO created and run by human trafficking victims. The group’s founders are being recognized for working to root out human trafficking and transforming their lives to serve other trafficking survivors. The group has established a halfway home that provides shelter and assistance to survivors and emergency shelters for women and girls at risk of trafficking.
Indonesia’s Komisi Pemberantasan Korupsi, or Corruption Eradication Commission, won for its successful campaign to prosecute erring officials, recovering more than $80 million in assets, and undertaking civil service reforms and citizen anti-corruption education.
Each awardee will receive a certificate, a medal and a cash prize.