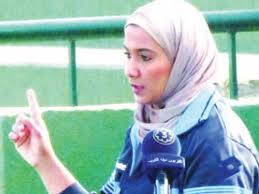 Wimbledon’s first Arab female umpire to officiate was worried that her hijab would anger some tennis fans.
But Aseel Shaheen’s fear proved to be futile as she overcame her lack of confidence.
“It’s an indescribable feeling being here. It’s something big, it’s a challenge. I’m the first female from the Arab world to be an umpire at Wimbledon,” she said in an interview with Sport360.
“I was worried that they wouldn’t accept me because I wear a hijab, but on the contrary, they really accepted me. London is quite open toward hijab, but maybe it’s not too common around the tennis world. But me wearing the hijab and working on court during a tennis match at Wimbledon is a sign that the world is starting to accept us more.”
The 41-year-old Kuwaiti umpire has been in the tennis officiating business for a while now, having taken an officiating course in 2002.
“I told them I wanted to be an international umpire, I have the qualification and I have the language skills, because I speak good English. So I went to officiating school and I became a white badge in 2011.”
Shaheen also officiated at the ATP and WTA events in Doha and had her her first experience at Wimbledon qualifying last year.
Shaheen, who became a line judge after enrolling on a course in 2002 admitted that even though she didn’t a lot about tennis before enrolling for the course she finished third in her class.
“I kept going. It became a challenge for me because they would always nominate the guys and ignore me,” she said.
The only drawback she said would be that line judges often receive icy stares and harsh words by the players who disagree with their decisions which can be prickly.
However, she said Hawk-Eye technology on several courts has made their job less stressful but they still need to be wary of naughty serves and often charm the crowd with their timely and graceful escapes. — Agencies