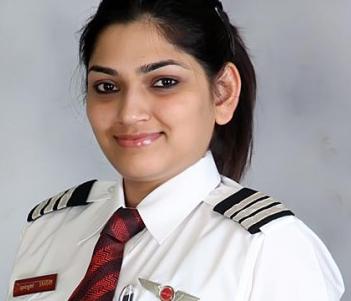 Breaking stereotypes about Muslim women, a young Indian Muslim is taking pride in working as India’s only woman Muslim pilot, achieving the dream of many girls worldwide.
“People initially think I’m Christian and then gawk when I tell them my full name,” Saarah Hameed Ahmed told Hindustan Times on Sunday, March 8.
“I just love the look on people’s faces when they discover I am Muslim.”
Growing in Bengaluru, in India’s south west state of Karnataka, Saarah succeeded in breaking stereotypes.
Though the majority of residents say women are useful as mothers and housewives only, the 25-year-old girl managed to win people over with a combination of humour and tact.
“Initially none of us encouraged her. In our community girls don’t usually take up professions where they have to stay away from home and live in hotels without an escort,” confesses her father Hameed Hussain Ahmed, a professional photographer.
As his daughter was determined on pursuing her dream, the father spoke to his friend Atif Fareed, who is a senior pilot in the US.
“Fareed told me that I should consider myself lucky because most Muslim girls don’t even dream of flying. If he hadn’t convinced me, I might have made the blunder of killing Saarah’s dreams,” he says.
In 2007, when she was just 18, Saarah enrolled with a flying school in the US.
“Those days most Muslim students were being denied US Visas. When she got the Visa without any trouble I saw it as a final message from God,” says the deeply religious Ahmed.
Saarah’s mother, Naseema Ahmed, says she never had any doubts about sending her to the US.
Her proudest moment, she says, was when a group of Muslim girls surrounded Saarah at a wedding and started asking her for tips to become a pilot.
New Dreams
Achieving her life dream to be a pilot, Saarah has other dreams about marriage and children too.
“I really want to get married and have children,” she says.
“I don’t understand people who just look at my photo and want to get their sons married to me. Don’t they want to know what I have studied or where I work?”
Some of her suitors wanted her to quit her job.
“My father has shooed away people asking them to get their sons to quit his job and move cities,” Saarah said.
On International Women’s Day, the young Muslim encouraged other Muslim girls to pursue their dreams.
“Don’t fret over what the community thinks of you. And don’t let them kill your dreams.” And what is she planning on women’s day?
“Fly, of course! My airline is very keen that I fly on Women’s Day.”
For almost a century, women have found more and more reasons to celebrate March 8th as International Women’s Day (IWD).
Initially staged to protest women demanding better working conditions and better pay, IWD today is used to recognize the role of women in everything from fighting oppression to being mothers and wives.