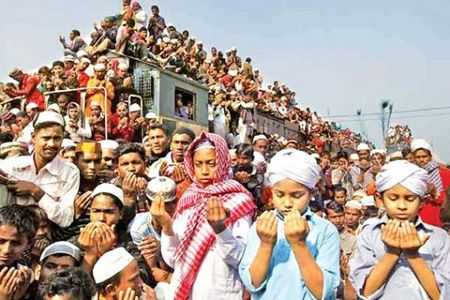 The first phase of three-day Biswa Ijtema, the second biggest Islamic congregation after the holy Hajj, began this morning with general sermons (aam-bayan) on the bank of river Turag at Tongi, on the outskirts of the capital Dhaka.
The congregation began after Fazr prayers with delivering special sermons (am-bayan) by veteran Islamic scholars. Several lakhs Muslims are participating in the congregation, organized by Tablig Jamaat, will conclude on Sunday with the final prayers ‘Akheri Munajat’.
Due to the blockade imposed by the 20-party alliance, the people’s participation this year is comparatively lower than the people came on the last year.
President Abdul Hamid and Prime Minister Sheikh Hasina gavel messages ahead of the Ijtema. All preparations for holding the Biswa Ijtema have already been completed.
In the first phase of the Ijtema, Muslims, are from thirty-three districts will stay at 40 khittas(parts),have been requested to stay at the particular khittas according to the name of their districts, said the Ijtema organizing committee.
Musollis of Gazipur district will stay at Khitta-1, 2, Khitta 3-13 for the musollis of Dhaka district, 14 for Sirajganj, 15 from Narshingdi, 16 for Faridpur, 17 for Rajbari, 18 for Sariatpur, 19 for Kishorganj, 20 for Natore, 21 for Rangpur, 22 for Sherpur, 23 for Rajshahi, 24 for Joypurhat.
Musollis of Gaibandha district will stay at khitta 25, for Lalmonirhat 26, for Hobiganj-27, Dinajpur -28, Sylhet-29, Chandpur-30, Feni-31, Chittagong-32, Bandarban, Khagrachari, Rangamati-33, Bagerhat-34, Narail-35, Chuadanga-36, Jessore-37, Bhola-38, Barguna-39 and Khitta-40 for Jhalokhati district.
The second phase of the event will begin on January 16 and conclude on January 18.
Bangladesh Army has constructed seven pontoon bridges connecting the two banks of the Turag for movements of the devotees. A total of 17 entrance gates have been constructed around the Ijtema venue. Around 10,000-12,000 loudspeakers have been arranged for the Ijtema to facilitate devotees hearing sermons of the religious leaders and scholars.
Besides this, at least 20,000 makeshift toilets have been set up to ensure sanitation of the musollis.
About 9,500 members from different law enforcement agencies have been deployed in and around the Ijtema ground for ensuring security of the devotees.
“A five-tier security arrangement has been made for ensuring safety of the people,” said Harun-Ar-Rashid, police super of Gazipur. The fire service department has also installed a control room on the Ijtema ground, said M Akhteruzzaman, deputy director of Gazipur Fire Service.
He said the firefighters will remain standby at the Ijtema venue to face any fire related catastrophe.
Nearly 60-70 physicians, including specialized doctors, have also been engaged at six temporary medical camps installed in different parts in the Ijtema ground, said Dr M Anisur Rahman, civil surgeon of Gazipur.
The Ijtema is being held in two phases for the last three years considering the increasing number of devotees.