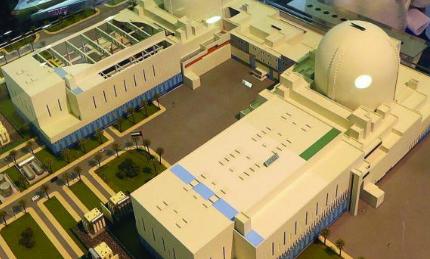 The first of four nuclear reactors being built by the UAE will come on line in 2017 and the rest will be fully operational by 2020, an official said.
“When they are fully operational in 2020, they will generate 25 percent of UAE’s power needs,” the CEO of the Emirates Nuclear Energy Corp. (ENEC), Mohammed Al-Hammadi, told an energy conference in Abu Dhabi.
Al-Hammadi said that 61 percent of the first reactor has been completed and it is slated to start production in 2017.
Work is underway on the second and third reactors while the site is being prepared for the fourth, he said. The second reactor will come on line in 2018, the third the following year and the last in 2020.
Al-Hammadi said another five percent of UAE electricity needs will be provided by renewable energy sources by 2020, helping the Gulf state to cut 12 million tons of carbon emissions.
In 2009, an international consortium led by the state-run Korea Electric Power Corp. won a $20.4 billion (15.8 billion euro) deal to build four nuclear power plants in Baraka, west of Abu Dhabi.
Under the biggest single contract Seoul has ever won abroad, South Korean firms including Samsung, Hyundai and Doosan Heavy Industries are building the four 1,400-megawatt reactors.
Al-Hammadi said ENEC has signed a $3 billion contract with international firms to provide fuel for the plants over 15 years.
The UAE sits on a large wealth of oil and gas and pumps 2.8 million barrels per day of crude oil.
In March, Abu Dhabi also opened the world’s largest operating plant of concentrated solar power, which has the capacity to provide electricity to 20,000 homes.