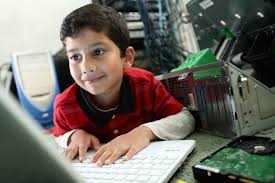 Pakistani-Briton Ayan Qureshi last month became the youngest every Microsoft Certified professional, accomplishing the feat at the age of five years, 11 months, The Independent reported on Wednesday.
The Coventry based whizz gave his exams in Birmingham University last month, toppling Pakistani Mehroz Yawar who passed the exam at the practically ancient age of six and a half.
Ayan developed an interest in computers and high tech gadgets in the very early age, thanks to his father Asim Qureshi who is an IT consultant.
He built his own home computer lab and likes to spend his leisure time in the lab. Later Ayan successfully created a computer network, connecting two PCs, two laptops, one switch and a router.
He said he was thrilled to find that the devices could ping each other, and that data could be transferred from one to another.
Ayan installed and configured Windows 8 and 8.1, partly following training videos, partly listening to his attentive father’s tips.
“He was first curious about how the computer actually works, and what a network was. I answered his questions, and then when he kept saying how interested he was, I explained to him the theory in as simple terms as possible,” Ayan’s father says.
The young whizz was born in Lahore, but the family, including his mother, a doctor moved to London in 2009. His younger brother was born the UK in 2011.
Ayan joins Arfa Karim among a list of a Pakistanis who have attained Microsoft certifications at increasingly young ages. Karim in 2004, at only nine years old, became the youngest Microsoft Certified Professional.
An extraordinarily gifted girl, Karim was selected as Pakistan’s representative at major international tech conventions and forums, and was invited to meet with Bill Gates.