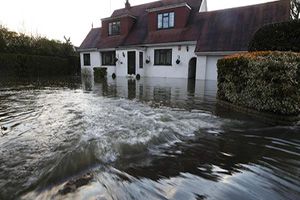 At least four people, including a pregnant woman, have died in storms that battered southern UK on Friday and Saturday.
According to reports, an 85-year-old male passenger of a cruise ship died after massive waves hit the craft in the English Channel on Friday. Several other passengers were also injured in the incident, including a woman in her 70s, who was airlifted to a hospital in France.
A 20-year-old pregnant woman was also fatally injured when two cars collided in high winds and heavy rain in Gwent County, Wales, on Friday. The woman was reportedly taken to hospital but both the mother and the baby died.
A 49-year-old minicab driver also died when masonry from a building in Holborn, London, fell on her car on Friday, killing her and injuring three other people.
Meanwhile in Ireland, a 65-year-old man working for a telecommunications firm was killed in Cork on Saturday, when he was trying to erect a fallen telephone pole, which fell on his head.
Heavy storms in the country also caused power cuts affecting nearly a million homes. Many roads have also closed and rail services are disrupted.
The Environment Agency (EA) has forecasted better weather conditions in the coming days. However, it has warned people to remain vigilant as ground water level could cause floods in case of rainfalls.
Several flood warnings are also remained in place along the River Thames, which breached its banks after reaching its highest point in years.
UK Prime Minister David Cameron has already come under fire for his government’s poor handling of the crisis.