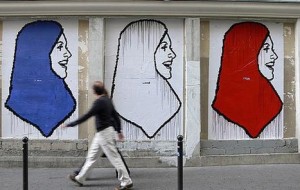 Attacks on Muslims in France, including women wearing headscarves, increased by 11.3 percent in 2013, compared to the previous year, according to the National Observatory of Islamophobia.
Two hundred and twenty six Muslims were attacked in 2013, according to France’s police and military records, of which 164 reported cases were threats against Muslims and 62 were actions against Muslims.
Chief of the Islamophobia Observatory, Abdallah Zekri said that the rise of attacks on women wearing headscarves, is especially ”disturbing”.
Fifteen women in Paris have filed a lawsuit against the assaults.
National Observatory of Islamophobia said that since the French anti-immigration and nationalist party, National Front (FN) won 17.9 percent of the votes in the 2012 presidential elections, an emergence of Islamophobic tendencies have arisen in France.