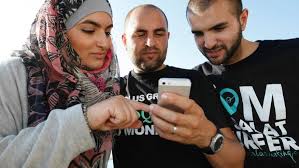 They simply wanted a place to pray, as required five times a day for faithful Muslims. But in France, that’s not necessarily simple.
The country has relatively few Muslim prayer spaces compared with the population — one for every 1,200 by some estimates — and a group of five friends from a variety of backgrounds decided they could do something about a problem they found themselves facing every day.
They created an online community they called Salatsurfing, building an app and website to link the faithful with people willing to donate space. Salatsurfing lists about 150 spaces — homes or businesses — throughout France. About 2,500 people have joined since the geolocation service started in September.
Sofiane Benabdallah, one of the founders, says the idea is similar to Airbnb or Uber — with one crucial difference: The service is free and the space is donated.
“By no means do we want to replace mosques. The mosque’s role is clearly identified in Islam’s precepts,” said Yosra Farrouj, another of the founders. “Salatsurfing is really an alternative in the way we allow someone to pray when a mosque is closed or there is no mosque around.”
Otmane Aziz, whose meeting room is among the listings, said it was natural to donate it as a prayer space.
“It’s a question of brotherhood, solidarity. To me, it seems right,” Aziz said. — AP