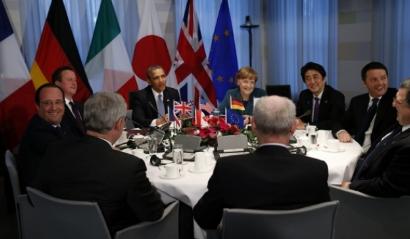 The leaders of the Group of Seven major economies agreed on Saturday to swiftly impose further sanctions on Russian individuals over the Ukraine crisis, and the United States could unveil its new punitive measures as early as Monday, officials said.
A senior U.S. official said each G7 country would decide which targeted sanctions to implement and while the measures would be coordinated they would not necessarily be identical.
The new sanctions are intended to punish Russia for failing to comply with an international agreement to help defuse the Ukraine crisis, according to a statement from G7 leaders released by the White House while President Barack Obama was on a visit to South Korea.
“Given the urgency of securing the opportunity for a successful and peaceful democratic vote next month in Ukraine’s presidential elections, we have committed to act urgently to intensify targeted sanctions and measures to increase the costs of Russia’s actions,” the statement said.
The new sanctions will hit Russian “individuals and/or entities” and Washington will announce its list as early as Monday, senior U.S. officials said.
Sources familiar with the matter said the U.S. list of individuals expected to include “cronies” of Russian President Vladimir Putin.
The G7 statement warned that “we continue to prepare to move to broader, coordinated sanctions, including sectoral measures, should circumstances warrant.”
At the same time, the leaders told Russia that “the door remains open to a diplomatic resolution of this crisis” on the basis of the Geneva accord and urged Moscow to take that path.
The G7 leaders accused Russia of reneging on its promises to use it influence to get pro-Russian militants in eastern Ukraine to disarm and leave buildings they have occupied.
“Russia has taken no concrete actions in support of the Geneva accord,” the statement said. “Instead, it has continued to escalate tensions by increasingly concerning rhetoric and ongoing threatening military maneuvers on Ukraine’s border.”
The announcement of new sanctions followed lobbying by Obama among top European leaders, who have been divided over how far to go.
“We, the leaders of Canada, France, Germany, Italy, Japan, the United Kingdom, the United States, the President of the European Council and the President of the European Commission, join in expressing our deep concern at the continued efforts by separatists backed by Russia to destabilize eastern Ukraine,” the G7 statement said.
“We have now agreed that we will move swiftly to impose additional sanctions on Russia,” it said.