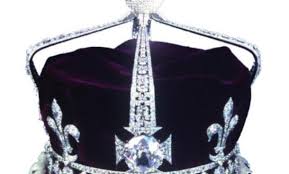 A Pakistani court is set to hear on Thursday a petition asking Britain’s Queen Elizabeth II to return the Koh-i-Noor diamond more than 150 years after it was taken from Lahore by colonial forces.
The 105.6 carat stone, which has also been claimed by a group of Indian businessmen in a separate court case, adorns a crown that was last worn in 1953 by Queen Elizabeth the Queen Mother at the coronation of her daughter.
Originating in the Golconda mines of central-southern India, it passed through the hands of conquering Mughal princes, Iranian warriors, Afghan rulers and Punjabi Maharajas before being surrendered by a young Sikh prince to Britain following the conquest of Punjab in 1849.
Literally translated as “Mountain of Light,” the Koh-i-Noor was recut from its original 189 carats in 1852.
It is currently on display in the Tower of London along with other precious ornaments that comprise Britain’s crown jewels.
The Lahore High Court will Thursday hold a preliminary hearing into the case following a petition by Iqbal Geoffrey, a 76-year-old Anglo-Pakistani lawyer and abstract painter, whose work has appeared in the Tate Modern and who has been seeking the return of the diamond since 1958.
“The Koh-i-Noor rightly belonged to Punjab province and was forcibly taken by the British from the local ruler and should be returned to Pakistan,” he told AFP, adding his case was fixed for Thursday after he overcome initial objections.
His petition added: “Grabbing and snatching it was a private, illegal act which is justified by no law or ethics. A wrong is a wrong. It does not become righteous or right by passage of time or even acquiescence.”
India, Pakistan’s main rival, has also long claimed the diamond. Last November a group of Indian businessmen and a Bollywood actress said they would mount a legal bid in an English court.