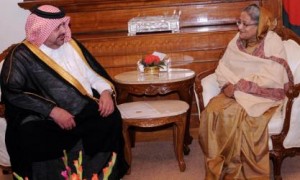 Prime Minister Sheikh Hasina said her newly elected government gives utmost importance to strengthening brotherly relations with Muslim countries and boost ties with them in the fields of trade and investment.
The Prime Minister said this when newly appointed ambassador of Qatar Abdullah Abdul Aziz M Al-Mana made a courtesy call on her at her Tejgaon office here today.
Laying importance on strengthening bilateral relations between the two countries, the Prime Minister said, both the countries could be benefited through exchanging experience in the areas of education and health.
She urged Qatar government for importing more manpower from Bangladesh and investing in different areas.
Sheikh Hasina expressed her gratitude to Qatar government for their warm hospitality during her visit to Qatar in April, 2012. Qatar envoy congratulated Sheikh Hasina for formation of the government and being the Prime Minister of Bangladesh for the third time.
Saying that Qatar always agrees to boost up its ties with Bangladesh, the envoy assured the Prime Minister of working sincerely to execute all agreements signed between the two countries.
As the Qatar ambassador invited Sheikh Hasina to visit his country, the Prime Minister accepted the invitation saying she would pay the visit to Qatar at a convenient time.
Ambassador at-large M Ziauddin, Principal Secretary to the Prime Minister Abdus Sobhan Sikder, PMO secretary Md. Abul Kalam Azad, PM’s special assistant Mahbubul Hoque Shakil and Deputy Press Secretary Bijan Lal Dev, were present, among others. -(BSS)