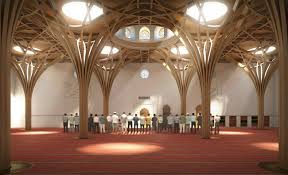 An innovative mosque is being built in the British university town of Cambridge and Turkey has played a major role in the development and realization of the project from the very beginning.
The mosque meets the demand of the town’s Muslim population — approximately 6,000 people — who have complained that the main mosque is too small for the burgeoning number of worshippers, forcing some to pray on the street.
The construction of the £15 million ($18 million) mosque commenced on Sept. 5, 2016, with a splash of holy water — or Zamzam — being mixed into the cement.
The initial phase of construction, which includes laying the foundations and building an underground car park, is expected to be completed by June. The second phase will involve the construction of the building roof and shell. The mosque, which is set to host up to 1,000 worshippers with 700 men in the main hall and a smaller section for 300 women, is due to open in 2018.
Women have played a major role in the development of the mosque, Abdal Hakim Murad, chair of trustees at the Cambridge Mosque Trust, told Arab News.
“Women have been very active in the design and fundraising. One female Cambridge student, Baraka Khan, who was diagnosed with cancer, amazingly raised over £200,000 for the mosque before she died,” said Murad, who is also a lecturer in Islamic studies at Cambridge University.
The mosque is set to be equipped with several spaces for women, including a soundproof mother-and-toddler area and a women’s treatment room for natural therapies.
The mosque is also slated to feature an Islamic funeral facility, a cafe, a Qur’an school for children equipped with digital technology and an Islamic garden open to all local residents, where many of the plants and fruits mentioned in the Holy Qur’an will be grown.
The mosque will also provide visitors with the opportunity to witness Turkey’s cultural legacy, with traditional carpets, calligraphy, ceramics and stained glass decorating the interior.
Murad said the mosque also plans to be environmentally friendly, with a solar-powered generator on the roof, water recycling facilities, green energy use, heat pumps and passive ventilation. According to Murad, this shows how the mosque project has internalized Islam’s emphasis on avoiding waste and on humanity’s duty of good custodianship of the earth and its resources.
Murad added that the city was in special need of a mosque due to its position as an international intellectual capital where the likes of Newton, Darwin and Wittgenstein had studied and a city which attracts the best students and future leaders from around the world.
“As someone who has taught Islamic studies in Cambridge for more than 20 years, I felt it was my responsibility to take the initiative and launch this project,” he said.
Echoing the belief that “the time of cheap, purely functional mosques is now passed,” Murad added that the new, educated generation wants mosques to be proud of — places of worship which represent the best of Muslim heritage and showcase Islamic art and civilization to the surrounding British population.
Peter Hayler, associate vicar of Great St. Mary’s, the Cambridge University church, and chaplain to university staff, agreed.
“Cambridge is a center of excellence in so many ways and attracts people from all over the world, people of all faiths and none. The Muslim community makes a significant contribution to both the universities and to the city and so the new mosque will be of tremendous importance as a place of meeting and interfaith dialogue,” Hayler told Arab News.
Hayler believes the project is visionary and ambitious in its scale.
“The new mosque is being built in a busy part of the town where many cultures mix. It will be well placed to make a significant contribution to community cohesion and to demonstrate that Islam brings a message of peace and devotion,” he added.
The mosque received donations from a variety of sources, with contributions from thousands of local Muslims as well as Muslims in Indonesia, Hong Kong and the US.
A member of the Saudi royal family and a donor in Qatar also gave a substantial sum toward the mosque’s construction. Recently, a private company in Turkey and Turkey’s Directorate of Religious Affairs also provided major funding.
“Now that construction is underway we are experiencing a boost in donations from around the world and the site is currently being visited by some high net worth individuals from the Gulf,” Murad said.
He said the project will contribute to the great artistic and architectural heritage of Cambridge where Muslims have been an integral part of the community for years.
“At a time when there is growing prejudice and misunderstanding about Islam and Muslims, we feel that a wonderfully beautiful structure like this, which uplifts and gives heart to a slightly depressed district of Cambridge, will significantly improve the public perception of Muslims,” Murad said.
Turkish architect Vedat Tokyay, who is also the timber consultant for the mosque, said the architecture of religious buildings should develop over time and reflect the ideas of the contemporary world without neglecting spiritual philosophy.
“The Cambridge mosque creates ideas about how to form the spiritual space and the outer shape which affects the neighborhood,” Tokyay told Arab News. “The new space is formed by tree-like timber structures with an organic atmosphere reminiscent of a forest. The outer shell is made of brick, reflecting the neighborhood’s existing architecture.”
The mosque will fuse the traditional and the contemporary in an organic manner, he said.