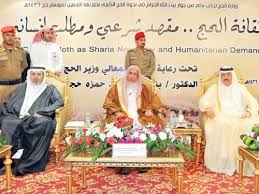 Saudi Grand Mufti and President of the Senior Scholars’ Commission Sheikh Abdulaziz Al-Asheikh and Haj Minister Bandar Hajjar at the inaugural session of the 40th annual grand Haj seminar, organized by the Ministry of Haj in Makkah on Tuesday.
Several eminent scholars, thinkers and researchers from all over the world are taking part in the two-day event, with the theme of “Haj Culture: Both as Shariah Necessity and Humanitarian Demand.”