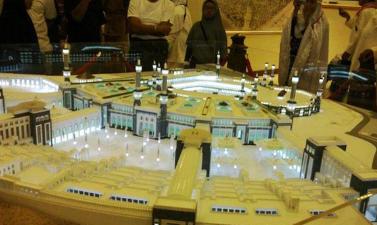 More than 2 million pilgrims, who are to perform Haj this year, can use the newly expanded areas of the Grand Mosque in Makkah for prayers, Custodian of the Two Holy Mosques King Abdullah has ordered.
In accordance with the royal directives, pilgrims will be able to perform prayers inside the expanded mosque and courtyards on the northern, western, southern and eastern parts of the King Abdullah Haram Expansion Project. About 67 percent of the project has been completed. King Abdullah has also instructed officials to open the expanded mataf, or circumambulation area, around the Holy Kaaba.
Sheikh Abdul Rahman Al-Sudais, head of the Presidency of the Two Holy Mosques, thanked King Abdullah for the directive, adding that it would reduce congestion inside the mosque and help pilgrims perform their religious rituals with ease.
He said the King Abdullah project would increase the mosque’s capacity to 2 million worshippers while that of the mataf from 52,000 to 130,000 per hour.
Al-Sudais said the project is being implemented using the highest standards in electric, mechanical, security and air-conditioning systems. “The project includes the construction of a special floor near the mataf for people with disabilities,” he said.