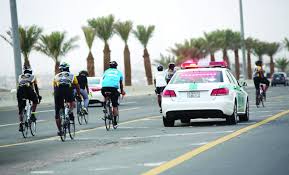 Essam Al-Ghalib: Cyclists in Madinah are a rare sight. It is even rarer to see eight of them arriving from the UK after a five-week journey in the saddle to take part in the Hajj pilgrimage.
The “Hajj Riders” started from the East London Mosque in the British capital and cycled across France, Germany, Austria, Lichtenstein, Switzerland, Italy, Greece, Egypt and Saudi Arabia.
They reached Jeddah on Friday and rested for a day before making their way to Madinah, where they were greeted with songs and dancing, and showered with flower petals and Zamzam water.
“We’ve been through rain, sunshine, sandstorms and through the Swiss Alps,” said Taher Akhtar, from Maidenhead in Berkshire, who was overwhelmed with emotion and shed a few tears as he stepped off his bicycle in Madinah.
“We’ve been up at 10,000 ft elevation and suffered frozen fingers and noses, but because Allah is with us, He made it easy. We are all blessed.”
Another of the cyclists, Saifullah Nasser, an imam from Northampton, said: “People from Russia and China have cycled to Hajj in the past. We are all cycling enthusiasts, but none of us are professional athletes. Going for Hajj is not difficult. I have done it before but felt that in order to appreciate the highs you have to experience the lows, and there were a few, but by the grace of Allah we have made it safely.”
The cyclists left Jeddah by car at 9 a.m. on Saturday and arrived 45 km outside Madinah, where they were joined by members of two Saudi cycling clubs, who rode with the pilgrims along the Hijra Highway.
“The highway you will be riding on was built along the same route that the Prophet Muhammad (peace be upon him) took when he traveled from Makkah to Madinah,” an official from the Ministry of Culture and Information explained before the team set off on their bicycles.
The ride took about two hours, with a police escort and support vehicles, and many spectators gathered by the side of the road to take photos and cheer the cyclists on.
There were so many people watching that the cyclists had to dismount about 500 meters from the Prophet’s Mosque, and continue on foot.
They bowed their heads in prayer and silently walked into the Prophet’s Mosque to give thanks for the completion of their journey, which aims to raise funds to support charity organizations in Syria.
The cyclists will rest in Madinah and begin preparations to complete the Hajj, which begins at the end of this month.